New calculations show that investing in solar will continue to be attractive for domestic properties despite the reductions in the Feed in Tariff (FiT) tomorrow when the FIT for domestic systems will reduce to 16p and the FIT lifetime will reduce to 20 years. However, the price paid for power exported back onto the grid will increase to 4.5p tomorrow, better reflecting the true market value of locally generated power. 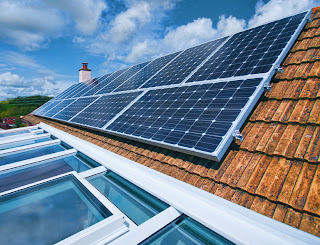 A returns ‘Calculator’ devised by the Solar Trade Association (STA) [1][2] for its members, based on credible data, clearly shows the good returns that domestic customers can expect.

Returns for investors in solar power over recent months have been exceptionally attractive [3] and the rate of solar installations is again on a steady upward trend, after a drop-off in April. The new calculations mean the STA and its members are confident that investment in solar will still be attractive when the Tariffs reduce tomorrow (1st August).

The STA Calculator illustrates returns with the following example: for a family installing a large 4kW system in August costing £8,000, using 50% of their power in the home and exporting 50%, the STA Calculator shows the system will have paid for itself within 10 years, with returns of 9.2% over the 20 year life of the Feed-in Tariff [4]. The solar power system itself is likely to last around 40 years providing many years more of household savings!

Householders are advised (for example by REAL) to always get 3 quotes for solar installations as solar prices continue to come down and it may be possible to better the example cited. The REAL Assurance website provides top ten tips for consumers thinking of generating their own energy [5]

STA CEO Paul Barwell said;
"Our figures show that solar is a no-brainer investment. Compared to the returns you can get these days in banks and many other investments, solar provides a very solid and attractive return. That is particularly the case if you consider energy bills are rising faster than anyone expected.

“Investors in solar are also helping us to drive an exciting energy revolution, putting power in the hands of everyday people, while saving the planet."

The STA Calculator is based on the Government's own projected increases in electricity prices and on established national average yields from solar power. In practice electricity prices are rising faster than Government is projecting and power yields from solar in some parts of the country are higher. Consumers who use more than 50% of the power their solar generates in the home can expect higher returns, while returns will be lower for consumers who use less.

Returns are likely to be even better because electricity bills are rising faster than Government figures suggest:

Because solar partly replaces the import of electricity from the grid, this is an important part of the returns calculation [3]. In reality electricity prices are rising faster than the Government data used in STA's model predicts. This means households could save even more money by switching to solar. Analysis of Government statistics by the REA shows that the average annual increase in electricity bills for the period 2005 to 2011 was 6.6% above inflation. While the STA Calculator is based on conservative assumptions, using this real-world rate of increase in electricity prices means returns on the example above of a 4kW system for a family home installed in August, rise from 9.2% to 11.4%, with payback after 9 years.

Paul Barwell said:
“Nobody knows what electricity prices will be in future but we do know they have gone up substantially over the past few years. This trend may well continue as the UK becomes more reliant on importing its energy in an increasingly competitive world.

“Solar gives people the opportunity to take control of their electricity bills and help us move away from damaging fossil-fuel dependence. We believe the smart money is on solar.”

The industry is delighted that the vital role of solar has now been recognised by Government - DECC will be revising their Renewables Roadmap to properly reflect the large contribution expected by solar power in 2020.
Posted by Chris Rudge at 08:54 1 comment:

10kw turbines add up to the best option

We have installed our first Bergey 10kW wind turbine this week. Though having installed a number of other turbine types, we are really impressed with the engineering used throughout the Bergey design ethos. As reported recently, the Excel 10kw turbine has recently withstood an American tornado and come out the other side unscathed. Unlike a number of fragile and high maintenance wind turbines being sold in the UK that either need to be shut down in high wind conditions to avoid damage, or worse simply fall to bits in extreme winds, the Bergey Excel 10kW just keeps going!

The Bergey 10kW will only need maintaining every 3 years (not 3 months, as some expensive types), and will only cost around £46,000 fully installed.
If you think you may have missed the boat for that higher 28p Feed in Tariff, the Government have announced last Friday 20th July that the new FiT will be introduced in December, not October as originally announced.. Just in time to get that planning through!