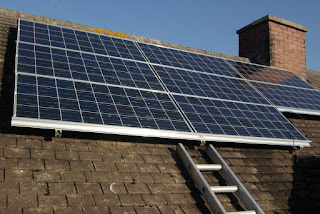 A domestic 1kWp system we installed in 2007. The house was ideally suited for solar PV, facing due south and having no shading from trees or other buildings to worry about.

We used Kyocera PV modules on the Alustand roof mounting system. The brackets and rails from Alustand were straightforward and conventional to install, giving a neat job with lead flashing around the brackets.
Alustand mounting system does rely on a level roof and we found after installing, even this 'straight' roof had undulations and the roof system needed adj

usting to allow the PV modules to drop into their location slots.

The result was very neat looking though when all finished.

Inside the loft area the G83 grid connected inverters were installed. At that time, the most cost effective option for small inverters for 1kWp systems was the Mastervolt Soladin 600watt units. As can be seen from the picture, 2 inverters were fitted with 4 of the modules connected to each.
A kWh meter (to log how many units have been generated) was installed adjacent to the fuse box downstairs.

We did find that a lack of digital display on the Soladin a bit of a setback when trying to evaluate performance, but certainly for a small budget G83 grid connect inverter price and performance is very good.
Posted by Chris Rudge at 09:49